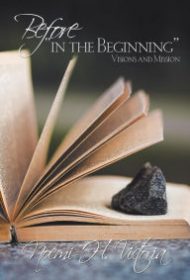 Rooted in scripture, Noemi H. Victoria’s faith-based novel is a self-described “spiritual odyssey,” an allegorical battle for a young woman’s soul from the perspective of the Father, the Son, and the Holy Spirit.

Through a series of presumable dreams and visions, Imeon Santana experiences a transformative “glimpse into the depth of the Father’s heart” when He asks her become a scribe and record everything she hears and sees. Imeon (which happens to be the author’s first name backwards) follows Him on a journey through Biblical myth—from Satan’s eviction from Heaven to the creation of humankind to the crucifixion and resurrection of Christ—and, in the process, embarks on her own intimate journey of self-discovery and, ultimately, salvation. Much like Dickens’ A Christmas Carol, in which Scrooge finds redemption through a series of otherworldly visions, Victoria’s Imeon finds spiritual redemption through images of Heaven and Hell.

The concept behind the novel is full of thematic potential, and the story is fueled by powerful metaphor and symbolism throughout; for example, in a sequence early in the novel, a devastated metropolis provides the symbolic representation of Imeon’s body and an untouched house her soul. Unfortunately, the execution is flawed. The vast majority of readers will already be familiar with the biblical scenes explored, so the real profundity of the story has to come from Imeon’s personal journey. Sadly, there is very little exploration of the protagonist’s life (she evidently wanted to be a dentist at some point) and overall spiritual journey. The lack of that character depth and narrative intimacy makes for a somewhat detached and deflated reading experience.

That said, the author makes inroads in helping readers comprehend the glory of God—“an omniscient, omnipotent, omnipresent God who, as revealed, continuously unveils his grace and glory through the finished deeds of his Son.”

In sum, while the story had the potential to fascinate readers, it is ultimately a flawed recounting of a spiritual journey of self-discovery.