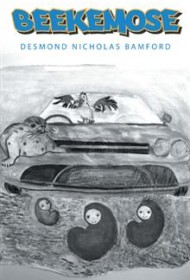 Beekemose is a set of seven very short stories written for children by Desmond Nicholas Bamford. They feature creatures called the Beekemose: “blue, kidney-shaped beings that live at the North Pole. They live in an igloo and spend much time fishing.” Most of the Beekemose stories revolve around the creatures finding human objects and puzzling out what they might be. No story is longer than six pages, and in the preface, Bamford makes clear that these stories are meant for infants, though he believes people of any age can appreciate them.

Because they are so short, the Beekemose stories might have been better suited to board books, or at least picture books, though Bamford intended them to be read aloud. However, they are too complex for infant ears. Most books for infants have simple sentence structures and colorful pictures to stimulate their brains, as they can’t understand the contents of stories. Clauses such as “why would you use a piece of cloth to identify yourself to an area?” and even single words such as “sarcastically” and “precisely” are far too advanced for very young children.

Additionally, some stories in the book (such as one in which the Beekemose find and discuss a bomb) are highly inappropriate for young children, and the tales are littered with spelling and grammatical errors (such as “Beekemose” spelled “Bekemose”), which might be distracting for adult readers.

Bamford provides some fun black-and-white pictures to help adults and children visualize the Beekemose, and a discerning parent may find some good material here. But the level of complexity and inappropriateness for the book’s intended audience is likely to be discouraging.