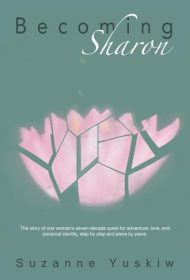 In Becoming Sharon, a woman’s journey towards self-realization begins with a diagnosis that will color her coming days.

Life seems almost idyllic when five-year-old Sharon “Trinnie” McCormick, spends the day at the beach with her widowed mother. Then, the child feels a bite on her toe and finds a crab latched onto her foot. A day later, she falls ill and is diagnosed with polio.

As she recovers, she develops coping skills that will see her through youth and beyond. She dates, participates in high school activities, and later obtains a teaching degree, beginning that career just as the country struggles with Martin Luther King’s and Robert Kennedy’s assassinations.

At Clayton High School, where Trinnie teaches English, she befriends Stanley, a “bad seed,” who attempts to enlighten her on the plight of African Americans. When he mentions an elegant restaurant she likes where he once bussed tables, he explains that he would never be welcome there as a diner, only as kitchen help. “That’s the way the manager will see me. Stacking plates… I guess I could graduate to a waiter like those other Uncle Toms.”

Trinnie (now Trin) soon marries and has children but can’t escape the sense that something is missing in her life. Then, tragedy strikes and, once again, her resolve carries her through.

Author Suzanne Yuskiw does a fine job depicting the life of a woman born into a generation experiencing the sweeping transformation of our culture. The story skillfully depicts the changes in dating norms, teacher/student relationships, the political climate, even marriage.

While described as fiction, Becoming Sharon reads like a memoir, with the story turning not on plot, but on events in the character’s life that aren’t always relevant to the tale’s outcome. Nonetheless, the character is interesting, with a heartfelt desire live a full and fulfilling life. As such, it should not only appeal to women of the author’s age, but also to their daughters and granddaughters.