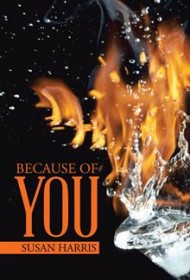 It’s best when an author can write a sequel so seamless that new readers can get lost in the story without having read the first volume. Because of You doesn’t quite get there, but readers who enjoy explicit sex and rapid-fire plot twists most likely won’t complain: This book runs on steam and danger.

Autum and Frank are newlyweds enjoying their lives and work when Autum’s evil ex, Jack, resurfaces, first in a dream and then clear as day. He wants Autum back and will not take no for an answer. If anyone feels more strongly about this than Jack, it’s his own father, who is also in love with our protagonist.

Autum ends up being kidnapped multiple times and flown, driven or dragged across international borders before things crash (literally) to a halt before the story teases with the promise of another volume. Autum and Frank have hot (and very explicit/mildly kinky) sex in several scenes; Jack and fiance Isobell (Autum’s former BFF) enjoy a steamy tryst of their own. Characters get dressed to fight, then strip back down to reconcile throughout the book.

Author Susan Harris knows her characters well from her debut novel I Promise You, but the writing in this volume is uneven. Narrative shifts aren’t always clearly indicated — we jump from Autum’s perspective to Jack’s without warning—and after so much danger, Autum’s willingness to go along with yet another kidnapper strains credulity. However, fans of Nancy Taylor Rosenberg or Janet Evanovich will likely be happy to overlook these shortcomings for the suspense and raunchy sex that are poured on in abundance.

Because of You is not for everybody. To reach a large audience, the book needs editing for narrative flow and perhaps just a touch more realism (or a slightly more streetwise heroine). But fans of this type of fiction know it when they see it and will find satisfactions in Because of You.