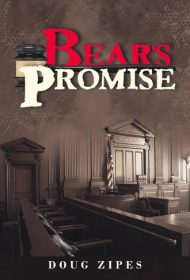 Doug Zipes’ new thriller Bear’s Promise centers on a lawyer’s quest for vengeance against a brutal police officer and a corrupt weapons manufacturer.

As the story gets underway, attorney Bear Judge’s sister, Melanie, calls him begging for help. Her husband, Jared, has just been killed by trigger-happy police lieutenant Vincenzo Sparafucile. Sparafucile shot Jared multiple times with an Electric Gun, a (fictional) weapon that is supposed to incapacitate suspects without killing them.

Bear vows that both Sparafucile and the gun company will pay. Jettisoning his partnership at a high-end New York law firm, he moves to Hopperville, Indiana, where the killing occurred. There, he hires Deroshay Odinga, a nonconformist young Harvard Law grad, to help with the case. Together, they uncover flagrant misconduct by both the police department and the Electric Gun manufacturer. But neither institution is willing to go down without a fight, and the two men find their lives in danger.

Bear’s Promise begins on a powerful note, thoughtfully invoking complex social issues such as racism and downward mobility. Jared is an African-American former football star who sustained severe head injuries in the game. He and Melanie are struggling financially, and he is killed while acting erratically because he cannot afford his medication.

Unfortunately, the novel subsequently collapses under improbable plot points. In particular, the president of Electric Gun acts so foolishly (including speaking to Bear and Deroshay without his own counsel present) that it’s hard to believe he has gotten away with so much. Likewise, the climactic battle between Bear and Sparafucile features a deus ex machina twist that strains credulity.

In its current incarnation, the novel is unlikely to win over fans of the genre. However, careful revisions to build on the novel’s promising first few chapters could make Bear’s Promise a powerful addition to the courtroom drama canon.