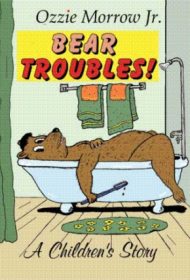 In the picture book Bear Troubles!, a talking bear enters the life of a young boy—and won’t leave.

A two-part tale, Bear Troubles! first presents the story of Jase, who is delighted to get a bear-shaped sponge in a cereal box. The toy is supposed to be placed in water, but Jase loses track of time while in the bath and is startled when the sponge turns into a huge bear who repeats, “Berry, pleased ta meetcha” and nothing else.

Jase can’t convince anyone to believe his wild tale, missing school as he tries to get assistance from a neighbor, classmate, traffic cop, and others. Finally, his family confronts him, only to discover he hasn’t made up the story about Berry. They put the bear in the clothes dryer, returning it to sponge form.

In part two, Berry returns, having been reconstituted by sprinklers at a park. This time, he follows around Sam, “the neighborhood wino,” steals sandwiches from picnickers and wine from the liquor shop, protects Sam when other drunks try to steal from him, and so on.

Although the idea of a toy coming to life isn’t original, Bear Troubles! has the core of an engaging idea, and the digital illustrations, while often unpolished, are colorful and match the book’s tone. However, both parts of this picture book are winding, with many daunting text-heavy pages. The first story is particularly repetitive.

More troubling, however, are the concepts offered here, especially in the second story, which feel far too mature for a picture book. This story includes theft, public drunkenness, and sexual innuendo, with adult dialogue such as: “Hey ya, bloke. Got any cigs?”; “Hey look what I got; he drinks the good stuff”; “Here, take a swig of this. It’ll loosen ya up.”

With an unclear target audience and meandering plots, including one that seems mostly intended to shock, this is an inappropriate choice for young children.