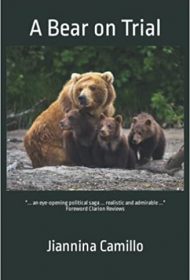 When a father and son attempt to escape a spooked bear, they spark a chain of events with far-reaching implications.

Gretel is a bear rescued as a cub and later released. She is well known in the town of Pianalto, near the Italian Alps. Roberto helped with Gretel’s rehabilitation as a cub and frequently travels to observe her.

As the story begins, Roberto takes his son Danilo on one of these trips and discovers the bear has three cubs. Then, a gunshot startles Gretel and she charges. Trying to get away, the father and son plummet over a steep drop-off, triggering a search and rescue effort and stirring up existing anti-bear sentiments. As the search for father and son proceeds, Zita, mayor of Pianalto and single mom of the perpetually disgruntled teen Melissa, is summoned to calm people. Meanwhile, Gretel, alone with her cubs in the forest, attempts to nurse the male cub who was shot.

Generally, the action centers on Zita, who will particularly resonate with women readers as she struggles to do her job, make peace with her own mother and deal with her daughter who is intent on finding the father who abandoned Zita when she was pregnant.

The novel explores many important themes, including wildlife conservation, politics and relationships, not only human, but in the wild as well. Descriptive details, such as “Like meerkats on sentry duty…,” add just the right touch of color.

The omniscient narrator largely works well; however, Gretel’s story might better have been relayed by an observer in the wild, such as a park ranger keeping an eye on her. Likewise, a scene in which father and son sleep, oblivious to a viper slithering over Roberto’s arm, loses dramatic impact as neither father nor son witness it.

Those issues aside, this is a well-plotted, compelling story with a tone that conveys the stakes without being overly dramatic. It’s likely to appeal to a wide audience.