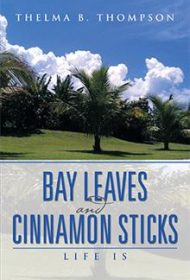 Bay Leaves and Cinnamon Sticks is Thelma B. Thompson’s fictional story of a Jamaican woman who gives up everything she knows and loves to move to the U.S. in order to give her family a better life.

Readers meet Millicent, more commonly known as Millie or Miss Millie, as she takes leave from her two jobs in the health care industry in the U.S. to return to Jamaica to see for herself the rewards of her hard work. Millie’s dream is of a new home for herself and her family, and she has been diligently sending money to her husband to supervise its building. Meanwhile, family members are caring for her children. But Millie’s dreams are crushed when she arrives to find she has been lied to and victimized.

Bay Leaves is a story rich in Jamaican culture with a protagonist for whom everyone can cheer. Millie is a god-loving, giving woman who refuses to accept defeat. At times naïve, she is also capable of insight and wisdom, and these positive traits work to attract others. As virtuous as Millie is, though, she is no fool and capable of making decisions at odds with her own beliefs.

Unfortunately, the narrative also presents some stereotypes, such as the lying, thieving man and the selfish children. Meanwhile, the wealthy benefactors, though complex, are almost too good to be true in their treatment of Millie.

The most serious weakness here is the language. Thompson slips in and out of dialect (“take” becomes “tek,” “New York” is occasionally “New Yawk”), using it inconsistently. Likewise, some language may be meant as dialect, but also could be typos or poor grammar, such a “I’s O.K.” or “If nutting happen to me, you know where to look.”

Those issues aside, Millie is an indomitable and engaging character, and Thompson portrays the colorful lifestyle of the Caribbean with skill. Readers will likely find enjoyment in both elements of this story.