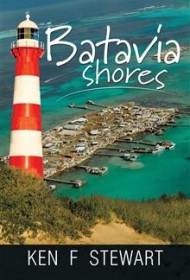 Series fiction must invite new readers into the fold while sparing fans too much repetition. Batavia Shores is a sequel that gets the balance right — and delivers a ripping yarn as well. If it proves to be the second of many, there should be plenty of readers on board for the journey.

Barney Merrick and Zep Marcon, detectives who first appeared in author Ken Stewart’s Devlin Pool, find that one thing leads to another with deadly force in this tale. What at first seems to be a simple carjacking sends the two on an extensive investigation; drug runners, gun smugglers, and international terrorists all have ties to the vehicle. If that’s not enough to hook you, there’s a subplot involving two Aboriginals (the book is set in Australia) in a feud that requires balancing tribal and mainstream law and customs for a true meting out of justice.

Stewart is a deft writer; this book is at times overloaded with action, but the plot unfolds with precision and never drops a stitch. A few typos don’t distract from the action, which includes someone falling into an open grave. Merrick plays football for a local league, and their exploits figure into the story in unexpected ways; a reluctant witness becomes remarkably willing to talk when she learns a local sports legend is asking the questions.

If Stewart wanted to slow the action just a bit and flesh out character and setting more, it could only make a good thing better. However, with it’s gritty violence and breakneck pacing, Batavia Shores is great as is, and sure to be a hit with mystery fans.