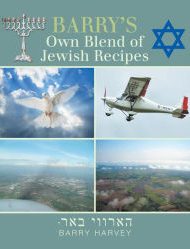 Barry Harvey, a disabled veteran of the British RAF and former chef, has assembled over 100 recipes inspired by his Jewish and Austrian roots in his slim cookbook Barry’s Own Blend of Jewish Recipes.

In the book’s introduction (written in prose that is heartfelt and amiable but extremely hard to follow due to grammatical errors and disorganization), Harvey offers tips on cooking and how to use the book, as well as biographical information about serious surgeries he has undergone. The book is a tribute to Harvey’s parents and grandparents as well as the extended family that helped him during a long and difficult post-surgical recovery.

Cooking from these recipes may be frustrating, as they are complicated by poorly written directions that lack clarity with regard to sequencing and method of incorporating ingredients. Also, there are no themed chapters or index to help readers find categories of recipes. Recipes are reminiscent of those one’s bubbe (grandmother) scribbles on an index card; however, those armed with the spirit of experimentation will find that they can be deciphered and enjoyed.

In gratitude to those who helped him through his illness, Harvey is donating some of the book’s proceeds to the RAF Association and Help for Heroes.