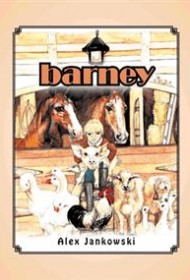 This children’s picture book introduces seven-year-old Tom and his friend, Barney the pig. Seven watercolor paintings illustrate the book, along with repeated cover art that serves as a border on the bottom of every page.

Divided into brief- and inconsistently titled chapters, including “Day One,” “‘Dawn’ Day Three,” and “The Resque” [sic], the story begins on the farm where Tom lives with his foster parents. Through his ability to talk to animals, he learns that Barney will be slaughtered soon.

Tom then endures a nightmare and foregoes the chamber pot to urinate outside in the snow. While he’s relieving himself, something magical happens: “This may sound odd, but when I looked down I saw the word HELP written in the snow in yellow piddle.” This scene is illustrated several pages before the quote appears, complete with yellow letters in the snow.

Immediately following this incident, a beautiful creature appears to help him. “Guinevere” tells Tom she heard his prayer and saw his message in the snow. With her magic and aid from farm animals, Barney is freed. Soon after, Tom’s uncle adopts him and “they all lived happily ever after.”

Though intended as a story of friendship, this book prompts many questions. Why is the book titled barney when it focuses on Tom? Why does the pig rescue get more attention than Tom’s adoption? What exactly is the moral of the story?

In sum, without aggressive editing and a clearer target audience, this book has limited appeal.