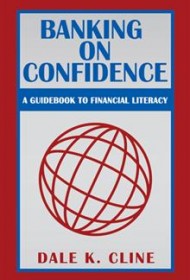 The financial world can be confusing for anyone, and often the public is forced to rely on quick-take summaries by journalists who don’t necessarily get into, or even fully understand, the mechanisms behind the headlines. Dale K. Cline, a CPA in public practice, business owner and real estate investor, lays out the basics of banking, accounting and the economy in Banking on Confidence: A Guidebook to Financial Literacy.

The book’s subtitle is a bit misleading, not because it’s untrue but because in the book marketplace, “financial literacy” usually means understanding the basics of budgeting and personal finance. Cline’s book takes on much bigger issues, whether it be explaining economic jargon such as “quantitative easing,” “crowding out” and “exporting inflation,” getting into the detailed workings of the real estate, oil and gold markets or revealing the People’s Bank of China’s currency intervention and sterilization operations. Cline’s thorough explanations actually make economics enjoyable by cutting through the confusion of arcane terms and misinformation.

Here’s an example: “While there are theories of sinister motives or underlying plans to control the US economy, the buildup of Treasury holdings by the Chinese can be directly tied to the PBOC’s [People’s Bank of China’s] currency intervention and sterilization operations.”

Cline begins with analyses of the workings of banks and the language of financial statements before expanding his view to the entire world economy. His writing is a bit dry at times but always clear and understandable, with concepts broken down to the basics. The title of the book references its main theme: Cline’s assertion that popular confidence in an economy and in its prospects for growth is, overwhelmingly, the single most important factor affecting that economy. It’s a good title, but again, one that doesn’t necessarily convey the worldwide scope of Cline’s book.

Banking on Confidence stands apart from other financial guides, both in its wide-ranging content and its clear, compelling delivery. It is highly recommended.