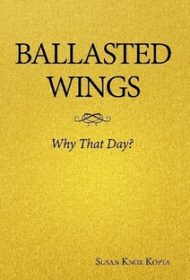 Near the end of this thought-provoking narrative, author Susan Knox Kopta refers to it as “A book born in grief [that] evolved into a book published in gratitude.” Set mostly between late 2005 and early 2006, it tells the story of Kopta’s 22-year-old daughter Alexis, an intelligent, vibrant, accomplished young woman, and Alexis’ brief, tragic battle with rapid cycling bipolar disorder.

Alexis was a senior at Barnard College, with graduation approaching, when the bipolar issues overtook her, sending her into a series of highs and lows in rapid succession. Her subsequent problems—three psychiatric confinements, a suicide attempt, the sudden inability to excel at college, restlessness, fog brought on by medications and unsuccessful treatments—are presented in a straightforward, chronological manner. “Bipolar unvarnished,” her mother calls it.

Alexis’ story ended tragically. Returning home from a therapy session, she lost control of her vehicle on a mountainous road and was hit and killed by a semi. “Alexis died that day,” her mother writes, “because mental illness exceeded her coping skills.”

While this is a slim book, it’s not simplistic. Alexis’s downward spin and her mother’s efforts to save her are both riveting and terribly sad. Kopta, a former legal researcher and attorney, engages readers with writing that combines compelling storytelling with a mother’s poignant emotions.

Alexis’s demise is more than a cautionary tale. After her death, Kopta became an advocate and educator, gathering and disseminating information about bipolar disorders. She has organized bipolar resources on a website, bipolarlinks.com. Meanwhile, Alexis lives on with the Alexis Knox Internship Fund, set up by fellow students at Barnard College, that provides financial assistance to students working at unpaid internships. Kopta is grateful for the positive impact her daughter’s life has had.

Ballasted Wings provides a valuable asset for mental health caregivers and advocates, those affected by bipolar disorder, and especially family, friends and loved ones of those afflicted with the illness. It’s also a wonderful tribute to Alexis.