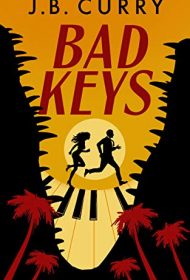 Bad Keys’ romantic partners are a study in contrast. Luke Hansen, 6’8” tall and blond, is a Minnesota native with a “relentlessly Lutheran upbringing.” Esmeralda Castillo is a glossy-black-haired Cuban-American swimsuit model who “charged the air around her with energy.” Their passions—his the piano, hers the welfare of endangered animals—intersect in Miami, over a shipment of pianos brought from China by Esmeralda’s family business, Castillo Imports.

The pianos’ keys are real ivory and have been impounded by the U.S. Fish and Wildlife Agency. Esmeralda is working with the feds to stop the importation of contraband. Meanwhile, Luke is looking for the idiot who thought he could bribe the feds for the ivory with money he stole from the Minneapolis Piano Tuner’s Guild, of which Luke is a longtime member.

Something even more valuable than real ivory is being imported in these pianos, and Luke and Esmeralda’s lives are endangered when they uncover this additional crime. They go on the run—their burgeoning romance coming to a climax as Luke fights to save Esmeralda from certain death in a showdown complete with a piano crashing from a balcony and a crazed ride in a smelly van recently occupied by wild alligators.

Bad Keys offers plentiful local Miami color and amusing dialogue between Luke and Esmeralda. But the bigger crime they uncover will be obvious very early to anyone reading carefully. Also, the point of view changes between Luke and Esmeralda constantly, causing literary whiplash. The sex scenes, particularly Luke’s solo fantasies, are raw and graphic, out of sync with their wittier, more sophisticated thoughts and banter.

Readers need a high tolerance for graphic descriptions of sexual desire, frustrated and resolved. But if they’re also keen on a high-speed, colorful caper and romantic sparring between equals, Bad Keys provides rewards.