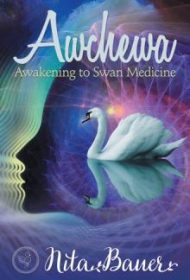 In Nita Bauer’s first novel, self-conscious Katie, 15, goes to stay with her eccentric grandmother after experiencing unsettling visions and voices, and discovers that she’s a descendant of the Oklahoma-based Tonkawa clan of the Tickawanic tribe—and that she holds the key to subduing a restless spirit.

Overwhelmed by premonitions, and by an apparently unprovoked attack by a swan, Katie is even more confused upon overhearing a phone call from Grandma Ruby, telling Katie’s mother, “You only deny your heritage…You cannot deny hers.”

Soon, her mother sends her to live on her grandmother’s remote ranch, where the weird portents continue. During the trip from Katie’s home to the Texas hill country, Katie’s mother fondly mentions her own grandmother, Angie, whose eyes, like Katie’s, were “a beautiful witch hazel” mix of amber and green. That’s unwelcome news to Katie, who routinely hides her inherited “ghoulish jack-o’lantern” eyes behind sunglasses.

Grandma Ruby’s tales of the mythological trickster Coyote resonate with Katie. So does the elusive man building a wickiup on a nearby ridge, who talks about “deer medicine” and “Katie medicine.”  When Grandma Ruby shows Katie photographs of Angie, it ignites a chaotic coming-of-age quest pitting newly-awakened Katie and her maternal elders against great-grandmother Angie’s malevolently restless spirit.

Bauer is a capable storyteller who keeps the action moving, and young readers will identify with Katie’s acute self-consciousness and prickly defensiveness around other young characters. The author’s tendency to portray Native Americans as omniscient spiritual beings, however, can be cloying at times. Awchewa feels more like an idealized idea of Native American life than a story deeply rooted in tribal culture. (An afterword notes that Bauer visited the Tonkawa reservation but that her novel “does not represent the true story” of the Tonkawa tribe.)

Still, young readers with a romantic vision of Native Americans may enjoy Katie’s journey through the netherworld—and Bauer’s conclusion leaves room for a sequel that could more deeply plumb Tonkawa culture.