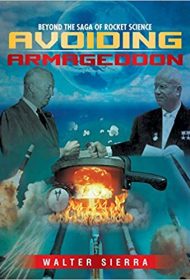 While some are familiar with the space race from the perspective of U.S. involvement, many may not have compared what was happening simultaneously in Soviet advancement. Walter Sierra does just that in volume two of his “Beyond the Saga of Rocket Science” series subtitled Avoiding Armageddon.

Sierra pulls back the Iron Curtain to look at how the Soviet superpower progressed in its quest for space dominance, showing where it sometimes surpassed U.S. efforts and where it fell short. For example, although the Soviets famously sent the first human (Yuri Gagarian) into outer space, followed quickly by other milestones, including the first woman in space, it was the U.S. that achieved the never-before and never-since moon landings.

The author’s charting of the Soviet development timeline shines a light not only on technological developments but also on the convoluted organizational structure responsible for design and execution, perhaps raising questions of how any achievements could be accomplished in that chaos.

Sierra also provides an intriguing look at Dwight Eisenhower’s contribution on the U.S. side, including Ike’s prescient thinking that rocketry development could be useful not only in wartime, but also for peaceful purposes like moon exploration. The author notes that because he witnessed the difficulty maneuvering troops and evacuating civilians during WWII in Europe, he championed the U.S. Interstate Highway System, to avoid the same should those necessities occur on home soil.

Those who enjoy charts, graphs, and photographs, and who love reading about rocket and missile systems will revel in this 300-plus page coffee-table style book. Unfortunately, however, outside of the visual content, Sierra doesn’t provide citation for many of his findings. In fact, he often switches from straight factual reporting into narrative nonfiction storytelling mode, leaving readers to question where the facts leave off and the author’s imagination kicks in.

Still, Sierra’s information about Soviet rocketry technology and its use in the space race could be a compelling addition to a reader’s library of technological books.