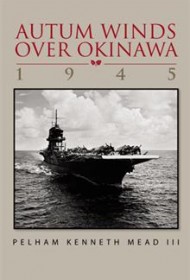 When Ken Mead disembarked from the USS Antietam onto the island of Okinawa at the end of World War II, Japan had already surrendered, his enlistment was up, and all he wanted to do was head Stateside to be with his wife and child. Unbeknownst to the sailor — and the three other Navy men who came ashore with him — Mead was about to plunge into a month-long cavalcade of snipers, hunger, and typhoons.

In Autumn Winds Over Okinawa, 1945, Pelham Kenneth Mead III pays homage to his father in a first-person narrative of the Navy officer who was all but forgotten on a hostile island near the conclusion of the Pacific theatre of war. At 86 pages, the story unfolds at a breakneck pace through the author’s prose, which at times is awkward and difficult to navigate through misspellings, hard-to-believe dialogue, and poor sentence structure.

But beyond what essentially reads like a first draft is a compelling story about a Naval reservist who was promoted to Chief Petty Officer and transferred to the Pacific Front in 1945. After Japan surrendered, he left his aircraft carrier for Okinawa with the intention of spending a few days on the island waiting to board another ship back to Hawaii. But soon weeks passed, and the sailors underwent one ordeal after the next: Japanese snipers who didn’t know the war was over, dwindling rations, language barriers, an Okinawan orphan, jungle diseases, skin rashes, and two devastating typhoons.

Although the book can be ungraceful at times, the story is nonetheless a rousing journey of historical fiction written by an author with an intimate connection to his subject matter.