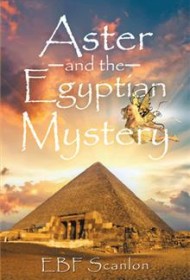 EBF Scanlon’s Aster and the Egyptian Mystery delivers a fanciful tale of theft and revenge that unravels across thousands of years.

The story opens with dark foreboding in 3,000 B.C., as a young servant fears a Pharaoh’s wrath at her failure to steal the powerful scrolls of the Goddess Isis, scrolls that can grant immortality. Little does she know the scrolls have been whisked into the desert for safe-keeping.

The action then skips to scenes of unexplained deaths within 16th century camel caravans and again in the 1890s after the scrolls have been unearthed by an archaeologist. Two-hundred years later, in 2008, a young museum worker in London becomes embroiled in the ancient goings-on as she prepares for an Egyptian exhibition featuring the purloined scrolls. She knows nothing of the deadly history but can’t shake a sense of dread.

Scanlon’s device of providing only the barest hint that these events are linked works well and immediately draws readers into the mystery. She’s an exceptional storyteller in the set-up but stumbles a bit in the unfolding, as she reveals that the museum worker, Aster, has another identity. Aster’s alternate life is revealed abruptly and feels oddly jarring, even in the context of a fantasy. There could have been a rich side tale on how she manages her double life.

Scanlon paints wonderful scenes, such as Aster in a dark basement with a strange sense that she is being watched and the unexplained flapping of wings. It is a genuinely chilling moment. But the inevitable showdown comes too quickly, too neatly, and in too few pages. This is a 5,000-year-old tale in the making. Readers will want to savor how all of the pieces ultimately come together. Delivered in less than 70 pages, the story begs for expansion.

Nonetheless, there is much to appreciate in Aster and the Egyptian Mystery. Readers will find a fun little page-turner by a writer who knows how to spin a mystery.