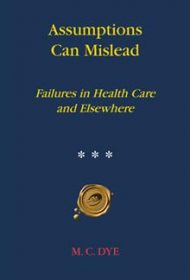 In Assumptions Can Mislead: Failures in Health Care and Elsewhere, psychotherapist M.C. Dye honors her beloved mentor, Ida Orlando, a nurse-professor ahead of her time in integrating mental health concepts into the master of nursing program at Yale University School of Nursing in the 1950s. The essence of the Orlando Model, which emphasizes the importance of listening to patients, is, as the author notes, “Never assume. Stay in the moment.”

The book is packed with stories about the dangers of making assumptions, many written in a fictional style with powerful dialogue, imagery and description. It begins with a disturbed woman in a local hospital pulling a fire alarm, prompting the staff to plan to send her to a psychiatric facility. After learning that as a little girl, the patient’s mother told her to pull a fire alarm if she got lost, Dye sent her home, where she belonged.

Then there’s the retired cobbler with Alzheimer’s disease whose caregivers initially assumed they were “helping” by correcting him when he became confused, only to discover he became less frustrated when they visited him in his own world, an imaginary shoe shop; and middle-aged Susan Boyle, discounted by the audience and judges on a British singing show competition—until she opened her mouth.

Unfortunately, the book’s strength—its storytelling—is also its weakness. The sheer number of examples overwhelms, and the author’s method of offering a string of seemingly unrelated stories, then waiting until each chapter’s end to tie them together is distracting. Dye offers few observations about Orlando until the closing pages, and only in the book’s second half does she begin to show how the anecdotes might be applied to the medical field by reducing bureaucracy and ego and relying on teamwork and listening skills to diagnose and treat.

To her credit, however, Dye reminds us that we all make assumptions and that “getting the story right,” simply by listening, is the best way to relate.