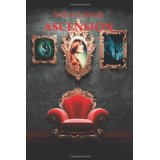 Nadine Lalonde includes many fantastical elements in Ascension, an ambitious work featuring a cast of immortals, hunky bar owners, police officers and violent criminals. But the author’s fondness for characters that live forever and boast backstories that reach all the way to the Crusades doesn’t change the heart of this book: Despite the magic and mystery surrounding some of its main characters, this story is actually a gritty crime thriller.

Lalonde’s protagonist, Ivy, is a recruit in a race of immortals living in New York City. A survivor of domestic abuse with a kind heart and strong sense of justice, Ivy’s entrance into the immortal club comes via Tavia, a woman born in the Near East in the 12th century. Ivy, Tavia and the rest of their clan specialize in vigilante justice, working with select members of the NYPD to root out violent crimes. This comes to a head as the city is in panic over the College Rapist, a perpetrator targeting young women across the city. The high-profile case soon catches up with Ivy, the rest of her immortal kin, her allies in the police department and her love interest.

The author’s fondness for whodunits and true crime stories is immediately evident, as the narrative seems drawn equally from TV thrillers such as Law and Order and vintage pulp novels, complete with grim crime scene descriptions. For the most part, Lalonde succeeds in combining the thriller tone with the more fantastical characters and plot elements.

The book’s pacing sometimes veers off track, and the author’s use of the passive voice slows down the action. Still, Lalonde’s love of the crime genre is clear, and there’s an immediacy in the book’s first-person approach. Those elements should be enough to satisfy fervent fans of dark mysteries, readers who aren’t apt to flinch at gory details. And fantasy readers are likely to enjoy the well-drawn characters and human drama presented here.