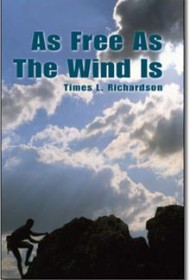 Is “free will” truly free? Or does this “free” gift from God come with great costs and responsibilities?

Such theological questions sit at the heart of As Free As the Wind Is, a treatise on free will and its consequences by Catholic layman Times L. Richardson. At age 74, this believer set out to explore the essentials of free will: “a gift of God…which many people do not understand and most people use unwisely.”

In fact, Richardson writes, every free action we take “is based on a basic decision to be for or against God.” Thus, from the mundane to the major–from what we eat for breakfast to whether we cheat on a spouse or invite our cranky Aunt Agnes to lunch–our choices and actions reflect our relationship to God and the church. Only by weighing the potential results of our free actions will we avoid hurting ourselves or others. Even not inviting Aunt Agnes will have consequences, says Richardson–one that may add to her loneliness, for example.

To unpack his thesis that free will is never “free,” Richardson offers anecdotal examples: The woman who freely put off seeing a doctor for a small breast lump, and later died from breast cancer. Or the bright, young office worker who freely squandered her chance at promotion by “celebrating” with a boyfriend who left her pregnant, alone, depressed after she aborts her fetus–and finally out of a job.

Subtle? No. Preachy defines Richardson’s style. A less heavy-handed approach would have tempered his message and made it more accessible to a wider audience. His book also lacks a table of contents and chapter titles, forcing readers to guess where he’s going. Where he stands is clear, however. For that, some readers may freely follow his treatise to its uncompromising end.