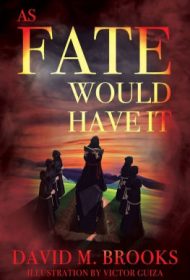 As Fate Would Have It, by David M. Brooks, is about a man who has a terrifying recurring dream in which he sees people in a coffin who are about to die.

The dream starts after Chris Battles’ girlfriend Sherry is paralyzed in a bungee jumping accident, and she blames Chris, who was only knocked unconscious. He sees Sherry in the coffin, and she tells him she’s dying and why.

When he tries to relay the dream to Sherry in the hospital, where she has been since the accident, she screams “Get out of my life!” The hospital staff, too, refuses to believe she’s in danger. After she dies, he continues to visit the dream, but now it’s strangers in the coffin.

Chris subsequently severs ties with almost everyone except Carly, who he meets online. When he eventually tells her of the dream, she tries to help him discern the reason behind it. Meanwhile, Carly’s jealous, abusive husband, Jerry, begins to suspect his wife of infidelity and seeks to discover with whom.

Then one night Chris sees a woman in the coffin. The next morning, he sees the same woman jogging in his neighborhood. He’s determined to save her life and enlists Carly’s help.

While the book has elements of a suspense story, it’s more of an inquiry into the nature of life: Do we control our fate, or is it foreordained? Haunted by this question, Chris clings to one hope: that “there was no such thing as fate…that mankind controls its own destiny.”

The story’s dialogue can be stilted and the pacing is rather slow. Additionally, there’s a lack of tension, as the story is often predictable. However, the characters are relatable and sympathetic, given Chris’ humanity in wanting to save the people in his dreams and Carly’s compassion for a friend.

This makes it a generally pleasant read for those willing to forego page-turning suspense for something more cerebral.