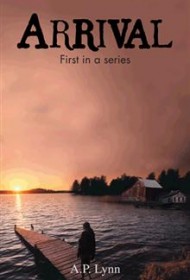 Aliens are among us, and they’re not at all shy about getting involved in human affairs.

That’s the central premise behind Arrival, a dynamic novel combining the familiar tropes of the U.F.O. genre with the gritty, whodunit pace of a TV crime drama. The fusion succeeds, largely thanks to author A.P. Lynn’s punchy narrative style, as well as an approach to characterization that never feels labored or too fanciful.

The story kicks off at a low point for Mark Daniels, a small-town detective in a rural Washington state police department. Following the tragic death of his partner and the equally devastating loss of his wife, Daniels faces eviction and a host of emotional morasses as he prepares to return to duty.

Thanks to the convenient arrival of Julie, a would-be renter for a vacant room in Daniels’ home who pays in advance, the detective is able to stay in his home. As Daniels starts working with his new partner, Cassie Edwards, on a mysterious mugging case, it becomes clear that Julie’s arrival isn’t as fortuitous as it first seemed. Just as Lynn sets out the groundwork for a detective drama that could fit into any episode of C.S.I., the author also reveals that a key character is a being from another world, an alien sent to earth with a specific mission.

That mission involves Daniels, as well as his wealthy father. As the two detectives make more progress in their case, the alien’s true mission becomes increasingly clear. The stakes of its visit are high, encompassing the survival of an entire race of extraterrestrial beings.

The combination of crime noir and alien conspiracies works well in this framework. Lynn’s prose is never too overblown or complex as it juggles the dual dynamic of this work. The author’s narrative fits neatly into the book’s 300 pages and leaves readers wondering what other unlikely genres Lynn can combine to such enjoyable effect.