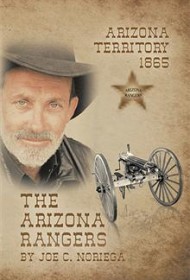 As the title indicates, this novel concerns the Arizona Rangers, a group formed to thwart Apache Chief Spotted Pony and his band of renegade warriors from starting a war with the people of Arizona in order to take back their land.

The story begins in 1865. General Lee has just surrendered, so Union soldiers First Lieutenant Joseph L. Gonzales and Sergeant Huckleberry supply and arm themselves for the long ride from West Virginia to Fort Bowie in the Arizona Territory, where each plan to claim the army’s allotted 40 acres and two mules. Supposedly war weary, the men talk about a quiet life of farming.

Along the way, they become entangled in numerous incidents (bandits, a Rebel soldier holding a grudge, two wagon trains attacked by renegade Apaches, and more), but in each encounter, the bad guys are easily vanquished. On reaching Fort Bowie, Gonzales and Huckleberry, along with U.S. Marshall McDonald, agree to take on the job of stopping Spotted Pony in his war against the territory’s whites.

The story follows the actions of the four main characters who converge at the deadly assault on Spotted Pony and his camp of Apaches in the Sierra Madre Mountains. The topic is intriguing, but several flaws hamper its success.

The narrative is heavily overwritten with unnecessary repetitions, asides, and feel-good incidents that do nothing to further or give depth to the plot. Readers are also burdened with one-dimensional characters, awkward, unbelievable dialogue, and anachronistic language, such as “don’t even go there”; “with a woman like that who needs enemies”; “oh, wow”; and “super recon.” The novel requires style and copy editing, as well as proofreading.

In the end, the book seems to be the work of a writer enthralled with weapons, maneuvers, drills, and marching formations, but oblivious to the plight of the Native American and, ultimately, the need of readers for a believable plot that compellingly propels itself forward.