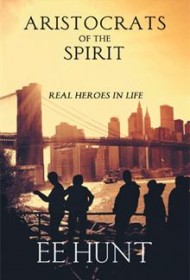 With his Aristocrats of the Spirit, EE Hunt delivers a memoir interwoven with portraits and stories concerning his friends, mentors, and acquaintances. An Episcopal priest, Hunt frames his memoir with his “callings” to various positions in the Episcopal Church, from his first stint as a missionary in Nopala, Mexico to his tenure as dean of the American Cathedral of the Holy Trinity in Paris.

Hunt notes in his introduction that the book includes “short records of men and women of all faiths who influenced me at different times in my life.” The term “aristocrat,” doesn’t refer to the wealth or status of these people, but rather denotes “those who influenced others in their own way for good.” One woman finds a place in his narrative because she “sustained a ministry of communicative caring for fifty years, remembering hundreds of birthdays and anniversaries….” Others are more well known, such as Olivia de Havilland, P. L. Travers, and Pamela Harriman, an American ambassador to France.

Hunt writes with a breezy, conversational style. The book is rambling in nature and requires readers willing to go along for the ride. It also requires some forbearance for Hunt’s tendency to list the various people he has known. For example, at one point he writes, “There were great people in that parish: the Wileys, Jack and Jean, especially their son Buck…and his spouse Nancy, the Mark Clarks, the Lopeses, the Howard Handleys, the Walter Riandas….” It’s as though, when writing these passages, he was more concerned with including those who would be offended if they were left out, than with crafting a balanced and compelling memoir. Hunt’s writing is also marred by the frequent appearance of dangling clauses and some run-on sentences.

As a personal memoir for friends and family, Aristocrats of the Spirit holds many charms. It requires rewriting, shaping and editing, however, before it could appeal to a larger audience.