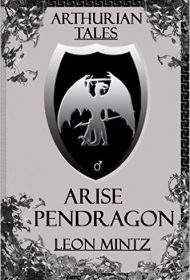 Arise Pendragon is the second in Leon Mintz’s epic Arthurian Tales series, but the characters will hardly be unfamiliar to fans of one of the Western world’s most enduring myths.

Arise Pendragon tracks a seminal stretch in the life of young King Arthur, who has yet to take on the regal trappings of popular legend. In Mintz’s epic tale, readers meet the legendary future king as Artorius, the adolescent son of the dead British high commander. Along with his mentor, Merlin, Artorius flees Gaul, seeking safe harbor as political upheaval grips Europe after the fall of the Roman Empire.

Between battles, kidnappings and flights across a landscape of shifting loyalties and morphing political leadership, young Artorius begins to build the qualities and connections that later come to define the legend of Camelot. During time spent in Nimes, France, Artorius meets Guinevere, a bewitching young woman whom he instantly recognizes as the love of his life.

The magic of that meeting is short-lived, however, as Guinevere disappears, and Artorius and Merlin eventually journey to Britain, where they take up a quest to find a missing girl named Zoe. The search carries its own intrigue and complications, as the pair find themselves on a journey stretching across several years and involving mortal peril.

Mintz writes with an easy expertise when it comes to general Arthurian legend and, more specifically, the politics, culture and populations of 5th century Europe. His keen eye for detail lends the story a gritty realism that adds immediacy to the myths. While his commitment to the story and its setting may prove daunting for casual readers, this book has a heft (at nearly 500 pages) that would appeal most to King Arthur devotees.

Those readers are in for a treat, as Mintz invests the story of young Artorius with pathos, offering a different take on the legend—one that’s sure to delight fans of the tales of Camelot.