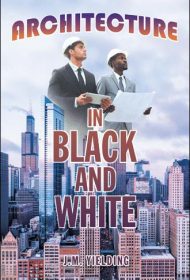 J.M. Yielding’s novel Architecture in Black and White tells the story of Calvin Weems Johnson, a black man in the mid-20th century South.

The novel begins when Calvin is six and closes when he’s middle-aged. He engages in activities: school, family dinners, church picnics, helping his parents re-design the attic for renovation. After he graduates from high school, he joins the army. There’s little mention of Calvin’s desire to be an architect beyond his interest in drawing, and his help in designing the attic. Although the title and the back-cover synopsis suggests that the story is about Calvin’s experiences training and being an architect, he doesn’t enter architecture school until page 252 of 352.

The plot includes a few melodramatic moments that are jarring and unfounded, such as when his high school girlfriend chooses to marry Calvin’s best friend because she’s afraid to tell Calvin she’s pregnant—even though nothing in the narrative suggests he wouldn’t have married her regardless. Such events aside, the plot is largely free of conflict, and Calvin experiences no growth or change throughout the novel.

Most notable is the lack of information about Calvin’s response to the terrifying events that besieged the black community during his life, such as the killing of Emmett Till. When Calvin registers the sadness of JFK’s death, the exclusion of these other events—which aren’t even mentioned—are all the more troubling.

Overall, there’s a general lack of insight into Calvin’s experience growing up black in the segregated South. When white children bully him and his friends, there’s little mention of the fear he must have faced. Oddly, the only response is his father’s comment that he’ll “bring [it] up at the next Booster Club meeting.” This reaction is representative of the novel’s general approach to tough racial and emotional subjects: evasion rather than illumination.

Ultimately, the story struggles to find a compelling plot and falters for lack of detail, both historical and emotional.