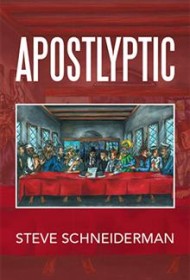 Apostlyptic is the fifth installment in Steven S. Schneiderman’s Louie Leppedimay thriller series. It is characterized by attempts at clever wordplay and meticulously detailed engineering puzzles that can overwhelm as often as they intrigue.

Unassuming, yet surprisingly astute, freelance investigator Louie Leppedimay is once again on the trail of an international mystery — either that, or a free lunch. Preferably both. Louie’s new assignment is to find out why a soap factory cannot account for the loss of certain materials in its soapmaking process — toxic matter left over from castor bean processing that is supposed to be shipped away for incineration. In the wrong hands, the pounds of missing husks and seeds could be made into a deadly poison—ricin—capable of killing thousands. It’s Louie’s mission to track down the disappearing detritus and ensure the worst never happens.

Schneiderman’s background as an environmental engineer is evident in every chapter, and he no doubt nails the details of waste site remediation, but his very thoroughness distracts from the flow of the story. Likewise, Schneiderman’s love of language often results in convoluted sentences, as in:  “All along the way, crevasse whistling wind vying with locomotive signaling orchestrated symphonic Doppler shifts.”

World-class moocher Louie almost saves the story, with his hometown knowledge of Chicago’s streets, and, of course, its eateries. Various characters in a vast cast join Louie for meals at The Cellar, in passages that are delightfully reminiscent of English pub scenes in traditional mysteries. These lowbrow conversations, along with an entertaining subplot about an international quilt exhibit with strange political and religious connotations, keep us from getting completely lost in the intricacies of electrical compressor recharging trends and the associated measurements  Schneiderman includes.

For some readers, these forays into the science behind industrial processes might be enough to carry the day. Others might find charm in Louie’s everyman character. The combination of the two, however, seems likely to appeal to a very slim audience.