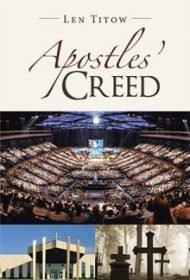 Len Titow’s novel Apostles’ Creed seems intended to drive home a point about how modernity is the enemy of the church. Ascertaining this theme from the cast of characters and situations presented is a challenge, however.

In Chapter 1, the first-person narrator is a reporter named Ray Brant. In subsequent chapters, Brant pops up infrequently to report on something, and the narrator’s identity then becomes unclear.

The actual main character is a preacher named Simon Fuller, a true believer who has a contentious relationship with another minister, Peter, who Simon considers to be “an antichrist, not a true believer.” Peter himself later admits he’s not a religious man and instead built the church to be a “large business, not to serve God.”

The story that progresses introduces characters who suffer some sort of trial (divorce, death, drinking, family problems), conquer their problems without much ado, and then curiously disappear from the narrative. For example, one girl gets drunk on her wedding day and shows up late to the ceremony—but everything turns out fine. When Simon momentarily loses his faith upon facing tragedy, someone tells him to shape up, and he bounces right back. Such easy resolutions make it hard to relate to their situations.

Additionally, many chapters are written-out sermons from either Simon or Peter that can be as long as ten pages. The speeches often lose their focus and would be difficult to follow whether you were a congregant in church or reading the book, and the approach quickly becomes tedious. Some of the content is even offensive, such as when the “bad” preacher Peter groups “homosexuals, the disabled, and the poor” together as minorities and asks his congregants not to judge them but to love them. Given the novel’s portrayal of Peter, it’s unclear, but seems possible, that the author is advocating the opposite treatment.

Titow writes passionately, but his work requires revision, as even his intended conservative Christian audience will have trouble determining his message in these pages.