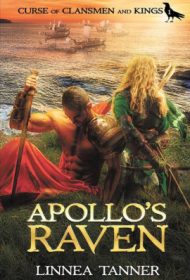 This historical romantic fantasy takes readers to 24 AD to the Southeast Coast of Britannia, blending magic, romance, and politics into a satisfying tale of one determined Celtic woman who must choose between doing her duty and following her heart.

King Amren and Queen Rhiannon are the parents of warrior princess Catrin, who they fear may be the embodiment of a curse placed on Amren by his former queen, whom he beheaded for treason. Catrin has a psychic connection to a raven that marks her as a sorceress and the potential downfall of her father’s kingdom. Her shape-shifting half-brother also poses a threat and has been banished.

When Catrin encounters Marcellus (Mark Antony’s great grandson) during a tense political meeting with the Romans, she is instantly attracted to this foreign enemy. At another meeting, Amren orders Marcellus held hostage in his castle to ensure the Romans honor their promise of peaceful negotiations. Inexplicably, the king and queen use Catrin’s bedroom as his holding cell and task her with guarding the young Roman to learn his secrets. Marcellus receives similar instructions to spy on Catrin, using seduction if necessary. As Catrin and Marcellus inevitably fall in love, Rhiannon informs Catrin she will be married off to another man for political reasons.

Minor flaws, such as contrivances surrounding Catrin and Marcellus and some anachronistic language (“Face it”; “The last thing I need”), are small distractions in this otherwise excellent book. The intricate story effectively combines genres and subplots, delivering well-developed main characters. Clear writing with highly descriptive language engages readers’ senses: “She covered his hips and legs with a fox-tail pelt to warm his cold skin, then dripped some oil on his torso and massaged the viscous fluid into his skin.” (The occasional seduction scenes are sensual, though not explicit.)

Fans of romantic historical fiction will appreciate the author’s obvious love of ancient history and attention to period detail in this promising start to a new series.