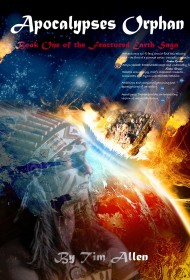 In this ambitious and occasionally amusing post-apocalyptic sci-fi/fantasy adventure, an astronaut frozen in a cryonics chamber awakens 150,000 years after a comet destroys most of Earth.

Apparently the only original survivor, Wolf finds a companion in Syn (the ship’s computer, modeled after its brilliant, beautiful creator, Dr. Cynthia Mason). Syn can create or destroy nearly anything with the ship’s technology, and produces multiple holographic versions of “herself.” Cynthia, who secretly cyber-stalked Wolf, programmed Syn with the same obsession over him: In holographic images, she wears five-inch stilettos with outrageously sexy outfits.

Wolf’s radiation-exposed DNA has mutated during the centuries, and his bulging muscles, toughened skin, and increased bone mass also attract women in the new primitive version of Earth that uses no science or technology. From underage girls to grandmothers, Earth females can’t resist him. Larger and stronger than other men, Wolf may be the legendary spirit warrior destined to lead them to freedom from Jonar, a ruthless killer who mysteriously acquired technology, using it as a weapon.

After proving his strength and loyalty, Wolf befriends King Waylon and develops a romantic interest in Nala, a beautiful warrior shunned by her lunatic husband. Lusting after Syn and Nala creates problems for Wolf; the book never resolves this love triangle or the King’s fight against Jonar. The story abruptly ends with: “Watch for Book Two, Syns of an Iron Wolf.”

Grammatical and usage errors (“he would never had saw Atlantis”; “prisoners…were euphemized”) and style inconsistencies (“20,000,” “twenty thousand,” “25 thousand”) could be fixed with professional editing. The dialogue also switches from stilted with no contractions to casual with contractions and doesn’t adequately convey individual differences (for example, one primitive man says to Wolf: “To hell with you freak.”).

Nonetheless, readers should enjoy Wolf’s awkward romantic encounters and Syn’s unpredictable behavior, which lighten the mood between each bloody battle. For those willing to overlook its flaws, Apocalypses Orphan provides an interesting version of one possible future.