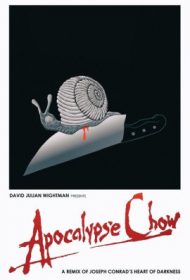 Apocalypse Chow closely tracks the plot structure of Heart of Darkness, which captures Charles Marlow’s voyage into the Belgian Congo to investigate Kurtz, an ivory trader who has descended into madness. The Charlie Marlow of Apocalypse Chow is a restaurateur sent to northern Ontario to fire Chef Kurtz, who has gone insane while working in “[e]xtreme destination dining.” Both novellas feature voyages into the wilderness with a parallel cast of characters.

Wightman’s parodic wit comes to the fore when he recreates minor but critical elements of Conrad’s story. For example, where Conrad’s Marlow suffers an assault by locals firing arrows, Wightman’s Marlow is attacked by restaurant workers throwing cutlery.

Wightman excels when he builds upon Conrad’s themes rather than mimicking them. Where Conrad’s Kurtz bewails “the horror, the horror,” Wightman’s Chef mourns “the hunger, the hunger,” echoing his earlier warning that “humans are the ultimate invasive species.” Wightman is less effective when he quotes Conrad verbatim. Conrad’s narrative voice contrasts significantly with Wightman’s, and the difference in tone is jarring.

In the end, Apocalypse Chow is not only a lampoon of exotic dining, but a warning for contemporary readers regarding food conservation and modern humanity’s rapacious consumption. To appeal to a wider audience, Wightman would do well to avoid relying on Conrad’s language and experiment more with his own narrative voice. Still, fans of Heart of Darkness and Apocalypse Now should find this parody a thought-provoking read.