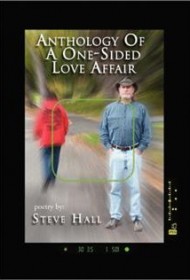 The poems in Anthology of a One-Sided Love Affair seek to chronicle the joys of the speaker’s mid-life love affair and the heartbreak that follows when his beloved ends their burgeoning relationship. Most of the book focuses on this lost love, epitomized by a poem such as “The End,” where the speaker laments: “It has come to an end./ Her choice made/ I leave her with good wishes/ and a piece of my heart.”

The book is arranged into four sections, each beginning with a prose overview of what is to follow. For instance, in the first section, the speaker recounts the end of a long-term relationship — “The magic is gone. The rut we are in is so deep” — and provides three poems to illustrate what he has just described. These poems, like the prose that precedes them, tend to over-explicate the speaker’s situation and emotions, stating exactly what is meant without leaving room for word play, image, or metaphor: “From lovers to roommates/ sharing space and costs/ mundane the existence I lead.”

In subsequent sections, the speaker focuses on Leigh, a recently divorced woman with whom he begins a romantic relationship. The biographical details of these introductions impede any substantial narrative distance between writer and speaker. Consequently, the reader experiences the poems overall as explicit diary entries written for the writer’s private purpose. For instance, in the poem “Tests,” the speaker tells us flatly, “I am told/ I have passed her mother’s test/ and feel good/ for she is a wonderful woman/ who would add value to my life./ I am pleased.”

The poems in Anthology, while clearly heartfelt, lack the figurative language and metaphorical possibilities that separate poetry from prose, and as a result, their subject matter soon grows redundant. While they undoubtedly serve a cathartic purpose for the writer, this deficiency means that they are not likely to reach a wide literary readership.