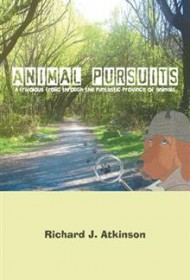 Giving animals, birds, and reptiles, human qualities appropriate to their innate characteristics, author Richard J. Atkinson weaves a fantasy tale of murder and chaos in the world of the animals left inhabiting Planet Earth after the demise of the human race.

The tale, narrated by Elmer, the aging grandfather elephant, and told to his two grand calves, Eric and Ebony, seeks to answer Ebony’s question: “Gramps, who created the game Animal Pursuits?” Elmer sets up the conceit by saying, “Animals have always ruled the earth . . . but in the beginning, it was man’s domain. The other animals played a secondary role, supporting man in his, shall we say, trivial pursuits.”

The animals act much like the humans who ruled before, including being the perpetrators of what appears to be the murder of Fungus Frog, who has “croaked for the last time.” The frog’s mutilated body is found, and Constable Perkins Pig begins investigating. As more bodies accumulate, Chief Inspector Bobby Bloodhound is brought in and proceeds to unravel a complex, dense, and lengthy mystery involving innumerable animals and dead-end possibilities.

The tale’s endless puns and asides are as countless as the characters. For readers, the effort is not so much working to solve the mystery of who killed Fungus Frog as it is uncovering the story within these 820 pages extravagantly over-laden with trivia and illogical, exhausting asides, such as Elmer saying, “All Fungus’s male friends gathered to celebrate . . .” To which Eric asks, “Fungus got all the mail?”

In the end, Elmer admits that he created the “Animal Pursuits” game — and readers realize that they haven’t been so much on the mission of solving a murder as involved in an endless trivial pursuit over who created “Animal Pursuits.”

The result is a frustrating and tedious read — although it just might be the cat’s meow for those with a penchant for endless word play and silly diversions.