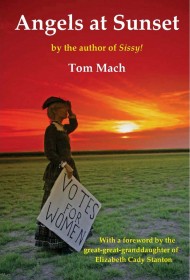 Pioneering women suffragists Elizabeth Cady Stanton, Susan B. Anthony and the dynamic Alice Paul are given their cursory due in today’s history books. But their actions vividly spring to life in the deft storytelling of author Tom Mach’s novel, Angels at Sunset. The women’s fight for equal rights in the 19th and early 20th centuries, at great personal expense, is illustrated through the book’s daring fictionalized character Jessica Radford.

In Angels at Sunset, Radford is now 78 years old and ailing. The smart, independent feminist is troubled as she relives the painful days of her past as portrayed in her own biography, penned by her daughter Mitzi Celeste Alcott, while the women and Mitzi’s husband, Francesco, journey by car from New York to Lawrence, Kansas. The author skillfully cross-cuts Radford’s story with that of the vengeful Michael, recently released from prison after 25 years, who is trailing Radford with plans to kill her for her role in his conviction for pushing his friend Chelsea off a cliff.

Angels, third of a trilogy, regularly traverses between the past and present as it draws out intricate relationships among numerous characters as well as Radford’s early interactions with the suffragists. While the novel lacks the literary punch of historical works such as Erik Larson’s Devil in the White City, it is solidly written and clearly well-researched, enabling Mach to add interesting historical details. (For example, in one aside, Radford thinks to herself, “Oh yes, 1886. Wasn’t that the year that a woman named Belva Lockwood appeared on the ballot for the U.S. presidential election?”)

With its strong pacing, effective use of foreshadowing, and deft storytelling regarding important historical events, Angels at Sunset is a winning book that shines a fresh light on the critical beginnings of feminism in the quest for women’s rights.