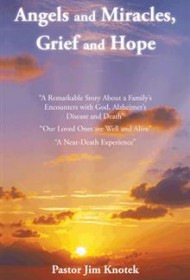 Over more than 40 years in ministry, Pastor Jim Knotek of the Lutheran Church-Missouri Synod has been buoyed by his religious faith. He has written Angels and Miracles, Grief and Hope to inspire readers to face their challenges in life with courage.

Knotek details the events of his life, nearly all shared with his beloved Ruth, a “gorgeous platinum blonde” he married when both were teenagers. Beginning from his Wisconsin childhood, Knotek experienced miracles. For example, at age 8, after he prayed to Jesus, a rope a friend had knotted around his wrists slipped off of his arms. In 1971, Ruth prayed for help when she needed to make a 40-mile drive without her glasses. She made the drive safely, and never needed glasses again.

Knotek’s prayers over celebrity Jimmie Rodgers, one of his parishoners, offered Rodgers relief from incapacitating headaches he had been suffering after being beaten nearly to death in1967. Knotek also became a friend and spiritual companion to such celebrities as Red Skelton and Pat Boone.

While he expresses deep gratitude for these moments of grace, Knotek’s writing often undermines his message by frequently following awe-inspiring events with prosaic matters. In 1975, for instance, Knotek’s young son was run over and dragged by a pickup truck, yet was unhurt. The next paragraph tells of a trip to Hawaii in which Knotek and his wife discovered large roaches in their hotel room. Such lack of attention to structure and tone undermines the more remarkable events.

The miracle that might have had the greatest impact on Knotek’s life was the one that, unfortunately, didn’t happen. His beloved Ruth was stricken with Alzheimer’s disease in 2005. He faithfully cared for her until her death in 2010.

Due to its stylistic issues, Knotek’s book succeeds better on the grounds of Christian witness than standard memoir. Secular readers are likely to relate most readily to Knotek’s care for Ruth and his grief subsequent to her passing.