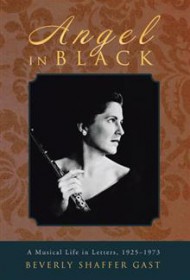 Elaine Shaffer grew up in a depression-era family that could just about get by as far as essentials were concerned but had no money to buy musical instruments or to pay for lessons. She developed an interest in music early and was largely self-taught, spending many hours a day playing various instruments until she settled on the flute. The enterprising Elaine sent a letter to the “great man of Philadelphia,” William Kincaid at the Curtis Institute of Music, describing the instruments and classical music she had already mastered, and he obliged her with an interview that inspired him to offer her a full scholarship that made her career possible.

Although Shaffer often encountered an “only men wanted” attitude among her peers and superiors in the world of classical music, she showed up at auditions and, undaunted, often earned a position as “second chair,” only to rapidly advance to “first flute.” The photographs alone in this book chart Shaffer’s rise to world renown among the likes of Andres Segovia, Yehudi Menuhin, and Aaron Copland.

Angel in Black sometimes has the feel of a scrapbook and a family celebration, exemplified in the “A Tribute” chapter, which has subheads such as, “Elaine loved life” and “Elaine loved people.” Elaine’s letters are reproduced often without comment, leaving the reader to wonder about certain statements–for example, this one made during a tour of Israel: “It really wears you out, talking to Jews, or should I say listening, but they are so nice.” Is there more that should be said about this comment? It is forgivable in a sister not to press too hard on a beloved family member, but it raises the possibility that the book obscures sides of Elaine’s character that deserve at least a little scrutiny.