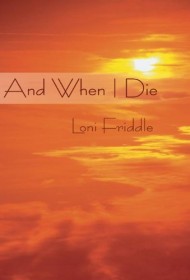 The idea of reincarnation is the thread that runs through Loni Friddle’s And When I Die.

Pia, the family matriarch whose husband, Hugh, died more than a quarter century before the story takes place, is fun loving and knowledgeable. She is, by all accounts, a superwoman: the perfect widow, mother, mother-in-law and grandmother. She is a foodie, an intellectual and gardener extraordinaire. She’s almost too good to be true. So is her granddaughter, Summer, whose accomplishments strain readers’ credulity even more than Pia’s.

Summer is only in her mid-20s when she wins the Nobel Prize in literature after publishing her first book, a volume about myths. Granted, her first job after graduating from Columbia University with a degree in journalism is as a staff writer for The New Yorker, so she is clearly talented. But the Nobel Prize?

Summer is not Pia’s only grandchild, yet the two share a particularly strong bond. In fact, Pia begins to consider that Hugh has come back to life as Summer because the granddaughter has so much in common with her grandfather, including a fervent interest in mythology.

This aspect of the story is intriguing, and to her credit, Pia acknowledges that the concept of Hugh re-embodied as Summer is farfetched. But Friddle’s conclusion, which ties together the beginning and the ending of the book, is problematic. Although cleverly leaving a few unanswered questions, the ending makes an assumption that the reader was not paying attention to what was taking place when the narrative began: the action of the opening does not mesh with the activity at the conclusion.

Overall, the idea of reincarnation is interesting and easy to embrace in this story. Ironically, it’s the more everyday traits and accomplishments of the novel’s characters, as well as a disjointed ending, that readers will find difficult to accept.