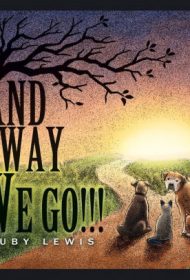 With And Away We Go!!!, Ruby Lewis has created a children’s chapter book depicting the travels of a woman with her family of animals.

The story is told from the perspective of Mr. Theo Blair, who describes himself as “a very passionate yet levelheaded Spitz-Maltese.” It chronicles the adventures of Blair’s owner’s sister and her trio of pets as they embark on a move across the United States. The story focuses on the reaction of the pets—two dogs and a cat—to each stage of the journey.

Lewis excels in capturing the character of each animal, such as Kiki, “a majestic Himalayan [cat] with a logical, matter-of-fact approach to all things.” Readers listen to Kiki and the two dogs, Sebastian and Isabelle, converse as they attempt to make sense of their changing surroundings, and the author does an admirable job writing from their perspectives. To particularly humorous effect, Lewis captures the impact of Kiki’s “treats,” which have a sedative effect, rendering her “one with the universe” and complacent enough to travel in her carrier.

The book contains endearing, intricately detailed illustrations, and its gentle tone has a comforting sense about it.

Unfortunately, the plot is rather lackluster. While the dogs experience mild mishaps, these are resolved quickly. There’s no central conflict, and thus nothing to create page-turning tension that drives readers to the conclusion. Additionally, the vocabulary and sensibility seem too sophisticated for young readers; for example, Mr. Theo Blair says: “[W]hat I hear in my house is treated with the utmost discretion when it comes to family business. This is a quality that only those of my lineage possess.” “Discretion” and “lineage” will be over the heads of all but the most precocious young readers.

Lewis’ book is well illustrated and successfully told from the animals’ perspectives. However, it requires more tension and keener knowledge of the young audience it aims to target to be fully effective.