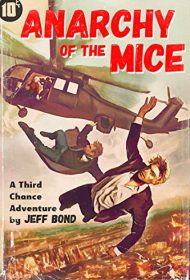 Jeff Bond’s exciting new novel, the first in the Third Chance series, pits a motley trio of operatives against a hacker army.

In the near future, corporations and governments are under threat from the Blind Mice, a group of young cybercriminals determined to overthrow the capitalist system.

The two men—partners in Third Chance Enterprises, a private security firm—recruit Molly to infiltrate the Blind Mice. Playing the part of a 20-something blogger, she quickly proves herself to the Mice’s top brass, including megalomaniacal leader Josiah and vengeful tech genius Piper.

The Third Chance team soon comes to realize, however, that the Mice are merely pawns of other conspirators. As the world collapses, Molly, Quaid and Durwood must fight for their lives and society’s future.

Bond’s three main characters leap off the page, especially Molly. He easily evokes her loving but maddening household; her grandmother’s obsession with sorting empty food containers is a highlight.

The Mice are equally well developed. Although Josiah is unstable and dangerous, he isn’t a cartoon villain; he makes valid points about contemporary society that may well win readers’ sympathies. Piper, too, is a gripping anti-heroine, dedicated to avenging her brother’s wrongful incarceration. Other antagonists are more broadly, and less satisfyingly, drawn, but remain compelling enough to please genre fans.

Bond balances character development with a vigorous pace, especially in the novel’s second half, when the protagonists hurtle from one life-threatening challenge to the next.

Anarchy of the Mice is a gripping thriller, sure to please its target audience and likely to have crossover appeal as well.