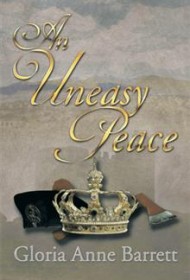 This historical novel opens in 1749 in the Province of Georgia, where British settlers, African slaves, German immigrants and Indian tribes share a nascent colony. The plot follows Katheryne, a young, good-hearted woman maturing within this timeframe.

Although Katheryne’s story arc – her challenges with family, friends, villagers and self-identity – is the most constant one in the book, the plot threads run wild. The ensuing jumble resembles a mix of Cinderella, Nat Turner, The Crucible, Harry Potter and Louis L’Amour’s Old West, with a little vampire lore thrown in for good measure.

While Barrett chose a little-known aspect of American history to explore, she effectively ignores it. Although Georgia is an agrarian region, the author depicts something akin to the Old West with a dusty Main Street, a tavern with a brothel and a vicious sheriff run amok. Instead of weaving in early Georgian history, Barrett offers a few tacked-on references. She overlooks factual timelines, touching on Freudian narcissism too early and witch trials too late. Not only does the text need proofreading, but anachronisms run throughout, e.g., “kicked his ass,” “great in the sack,” “barf,” “totally amazed” and “payback is going to be a bitch.”

Characters are two-dimensional, and other than the Germanic mother saying “Nein” or “Yah,” everyone sounds identical. Every major character vomits – repeatedly – to express extreme emotion. Additionally, the characters’ behaviors are wildly inconsistent: In one paragraph, for example, a woman is devastated, but by the next she’s joyous.

There is little intrigue here, as most issues are resolved instantaneously, such as when a vengeful slave accidentally leaves a clue linking her to a crime but moments later corrects it. While the author tries to introduce conflict, such elements are never adequately developed.

Creating a substantial novel is no easy task. Barrett’s book is a noble effort, but the author requires further guidance on the craft in order to offer a story that will fully engage her audience.