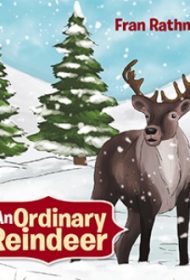 In this straightforward but uplifting rhyming picture book, Santa asks an “ordinary” reindeer to help with Christmas deliveries after his more famous team gets sick.

The narrator, a reindeer in the North Pole who goes unnamed throughout the book, notes: “I’ve always wanted to be a reindeer/ That pulled ole Santa and his sleigh/ But I barely made the second string/ All I could do was hope and pray.” He also practices and works hard, and one Christmas season Santa arrives and explains that his primary sleigh team has come down with the flu and won’t be able to fly.

The narrator is chosen to lead the second-string team, taking Rudolph’s place. Although he’s finally gotten his wish, the narrator balks at being asked to lead the team, explaining that he doesn’t have a red nose. Santa kindly brushes this off and wraps the reindeer in battery-powered Christmas lights. With this, the narrator feels confident in lighting the way and realizes that “Even an ordinary reindeer/ Can do extraordinary things.”

The story offers a relatable character and a satisfying plot, with appealing, expressive illustrations. It’s rhyme scheme is a bit uneven, however, and it message could have been improved two ways: Rather than having Santa cure the narrator’s nerves with a technological solution, he could have offered reassurance that the reindeer’s training and hard work qualify him. Similarly, following the team through the night, instead of just until they take off, could have shown readers how the narrator proved a strong leader. As written, he seems too focused on outside validation and remedies.

Many stories exist about Santa needing help. Christmas-themed stories about reindeer also abound. This book doesn’t stand out from the rest in terms of creativity or characterization. But An Ordinary Reindeer has charm and a positive moral that will appeal to young readers.