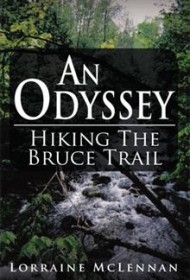 Lorraine McLennan, author of An Odyssey: Hiking the Bruce Trail, explains in the book’s introduction that someone in her group of lifelong friends suggested they should do something exciting. “At the median age of 67, we felt we had better begin sooner than later,” she writes. So they did. On a sunny August day in 2001, three Canadian women set out on the Bruce Trail. Their goal: walk the entire length of Canada’s oldest footpath, which stretches from Niagara Falls north to Tobermory.

All casual hikers, they tackled the trail a bit at a time, finishing the 550 miles eight years later. Now, McLennan has condensed their nearly decade-long endeavor into her first book. Patiently, slowly, just as the friends hiked their trail, McLennan tells the tale of their journey.

She chose the title Odyssey because, she writes, it’s “a series of wanderings and adventures.” But the promise of that ambitious title isn’t really delivered. McLennan is a competent writer, but her memoir is little more than a travel journal, with brief, cheery descriptions of attractions along the way. The long-distance walk is a perfect vehicle for telling a person’s life story with plentiful metaphors – the rocky trail, dense woods, heavy load on the hiker’s back. But to achieve this and create a memorable memoir, there must be more than a log of miles walked, fences scaled and rainstorms endured.

McLennan shows brief moments when her feelings of vulnerability catch her off-guard and give readers a tiny glimpse into the wonder she feels. ”Beyond the well-traveled roads of the area is the history of an era in its quiet repose,” she writes. But she reverts quickly to less-telling narration, where she calls sections of the trail “amazing” and “beautiful.”

An Odyssey might pique the interest of thru-hikers looking for new destinations, but readers who want the journey to be meaningful as well as entertaining will feel like they took a wrong turn.