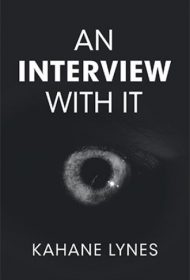 If you could talk directly with a divine presence, what would you ask? Author Kahane Lynes claims to have done so and in An Interview With It presents “information provided to me from the other side,” according to the back cover, about history, current events and black liberation.

While Lynes claims the information was given to him, the book is written as a discussion taking place between a man named Andrew and a presence called I Am, who prefers to be called It. Formatted like an interview transcript, every left-hand page is blank (possibly so readers can make notes? It’s unclear).

Both Andrew and It ask and answer questions, and their talk covers serious issues such as slavery, as well as some radical theories: cutting the hair causes brain trauma, for example. While the talk is wide-ranging, it never leads to a unified theory or overarching theme; the result is largely an amalgam of conspiracy theories.

The writing is mostly free from errors, although Lynes uses the phrase “conscious group” when it seems from context as if he’s referring to “consciousness-raising groups.” While the conversation is emotionally low-key, the subjects are provocative enough to keep readers turning pages, if only to see what unorthodox ideas will appear next.

There are inadvertently amusing passages here, such as the theory that emojis are conditioning young people to learn to read ancient hieroglyphics, but the denials of global warming, suggestion that only “some” mass shootings are real and injection of casual anti-Semitism are offensive and disturbing. It seems convenient to ascribe all this to a being that can’t be held responsible for its views.

An Interview With It is provocative, but the conversation never results in a meaningful conclusion. Ultimately, the book will appeal only to readers drawn to conspiracy theories.