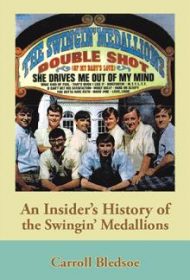 The Swingin’ Medallions were a “one-hit-wonder” band with a national #17 hit in 1966, Double Shot of My Baby’s Love—a raucous party song that gets in your head and doesn’t let go. The song was a smash in the local “beach music” scene, where the South Carolina-based group cut its teeth as students.

This slim book, written by original Medallions trumpeter Carroll Bledsoe, is a fond look back at the group’s rise and glory days. It’s written in a style that recalls a typical, albeit more detailed, Christmas letter, with a rundown of each member’s accomplishments from the previous decades.

Bledsoe recounts various early bands that led to the Swingin’ Medallions, and how their cover of Double Shot of My Baby’s Love, an obscure regional hit, caught on. He then describes the process of signing with a manager, recording the famous single, and hitting the road to expand the group’s base, playing everywhere from Arizona to Hawaii to the East Coast before returning to their home turf.

Readers looking for prurient details of a 1960s rock band’s exploits will be disappointed; there’s no sex and drugs—just rock n’ roll. The only racy anecdote occurred when driving to dog races outside Tucson. “As guys will do, we stopped on the side of the road to relieve ourselves,” Bledsoe writes. “Relieve means ‘pee.’ Soon a nice Arizona highway patrolman pulled up.” The cop warned them to be careful, as temperatures drop quickly in Arizona and snakes come out.

Those who flock to the band’s reunion gigs will undoubtedly enjoy this book. For fans of rock history, however, there isn’t much attention paid to the musical sound, which had its roots in 1950s R&B and evolved to feature dozens of groups like the Medallions, white kids playing “blue-eyed soul” music.

As a result, some might wish for a book that places the Medallions in the cultural context of the beach scene, instead of a holiday letter.