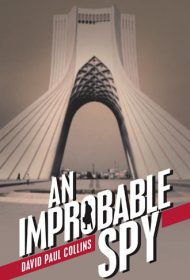 This riveting spy thriller about an American merchant banker drawn into a world of espionage where no one can be trusted is one not to be missed.

As the story gets underway, Jack Devlin narrowly escapes Tehran during the 1979 hostage situation in Iran, losing almost all of his business, and more importantly, leaving the love of his life, Farideh, behind. He is subsequently approached by an old, trusted friend who offers him a devil’s bargain: become an expendable spy, one the agency will deny; help the CIA and British MI6 obtain the ledger of Farideh’s father, arms merchant Mustafa Khaki; and they will get Farideh out of Iran for him.

Devlin is sent on a wild roller coaster ride through the treachery and mayhem of the Middle East, into a circle of agents, double agents, defectors, and collaborators, where he discovers that the warning of the British MI6 Chief who trains him— “In our business, things may not be quite as they seem” —is an understatement and that signing up for this job could easily cost him and his girlfriend their lives. Never being quite sure who to trust casts a dark curtain over everything Jack does. And in the end, well, you’ll have to read the book to find out who the real turncoats are.

The settings ring with authenticity. Collins’s descriptions of bazaars, street scenes, customs officials, and hotels in Tehran, Kuwait, and Egypt, and roadblocks manned by soldiers leading boys with AK-47’s, are vivid enough to convince anyone who has been in the Third World for any length of time that the author has been there, and not as a tourist.

The writing flows, the characters are engaging, and the passages showing MI6, the CIA, and Mossad deceiving each other to gain an advantage while “working together” are chilling.

In sum, this is a brilliantly written espionage tale—as good as it gets.