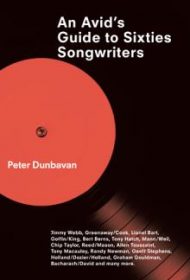 If you’re a pop music fanatic, you probably own many books about music: biographies, histories of genres, resources that offer chart rankings for decades of hits. An Avid’s Guide to Sixties Songwriters is a valuable addition to that library, one that provides a wealth of knowledge and entertaining trivia.

Peter Dunbavan is a musician and songwriter himself and has unleashed a lifetime of passion for ‘60s rock and pop music into an encyclopedia that’s impressive in its completeness and depth of information. The book offers 80 chapters, each about a different songwriter or songwriting team. Some artists will be familiar to even casual music fans: Nick Ashford and Valerie Simpson, William (Smokey) Robinson, Lennon and McCartney. But the treasures hidden within this trove of music history are the lesser-known, unfamiliar songwriters.

For each chapter, Dunbavan includes a table with the artist’s song titles, each song’s highest position on the U.S. and U.K. pop charts, and the artists who made them famous. Then he writes a comprehensive biography of the songwriter, often including salient details of the artists and producers who recorded the songs and stories behind each offering.

It’s a blast to read about Wes Farrell, a writer and producer who is a lesser figure in rock history but a minor god for trivia buffs because he co-wrote the 1965 garage rock classic Hang on Sloopy and later helped create the Partridge Family in the 1970s. Or to learn about the Foundations’ 1969 hit Build Me Up Buttercup, which was co-written by Manfred Mann lead singer Mike D’Abo and Tony Macauley. Both songwriters merit their own chapters.

The entries are well-written, chockfull of facts both fun and essential, and infused with the author’s obvious love of pop—but especially the pop music of that decade. Additionally, a song index allows readers to easily look up information on hundreds of titles.

In short, this is an irresistible book for any music fan interested in the 1960s.