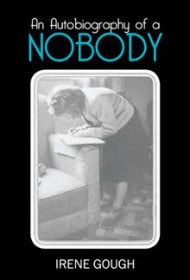 It’s a wonder the author of this disturbing, often compelling, memoir has prevailed long enough to complete her work. Born in London to harsh working-class parents, Irene Gough describes herself as a lonely, naïve child with few friends and low self-esteem. The book takes readers from her childhood through her successive marriages, two of them with men who physically abused her.

Given her esteem issues, it’s no surprise that Gough married three volatile alcoholics. What startles is her staunch defense of the middle husband, Bryan Gough: over 30 years, the man she calls “her knight in shining armour” demanded total obedience, flew into violent rages and once went after his family with a gun. Distrustful of doctors, he refused to call for medical help when his wife suffered a cerebral hemorrhage. In the book, she thanks him: she believes his inaction saved her life.

Such devotion signals a deep, mysterious love. What it says about delusion or dangerous co-dependence remains for readers to decide. Nobody is harrowing (husband number one threw the author over a fence when she was eight months pregnant), but it’s rarely introspective. Gough describes life in the office of the scaffolding company she ran with the explosive Gough and work on their cattle farm in flat, nearly colorless tones. One paragraph after finding “his huge hand around my throat” she muses: “At last our dream house could be built.” The growing waistline of a favorite dog gets the same attention as the spectacle of Bryan Gough setting the author’s clothes on fire.

The book is in need of shaping, editing and cutting, and the author’s frequent use of quadruple exclamation points wears thin. But Gough’s stubborn survival instinct and fierce love for her troubled second husband and children are undeniably authentic. “I may not have been rich in money and possessions,” she writes, “but my memories are a rich tapestry which can never be taken from me.”