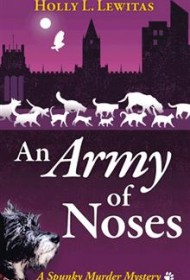 Holly L. Lewitas delivers a puzzling mystery, some entertaining asides on human behavior, and insight into the power of scent for animals in An Army of Noses: A Spunky Murder Mystery. Narrated in the first person by a dog called Spunky, the book follows the actions of Spunky and four cats – Fearless, Bobby, Sweetie and Fancy-Pants – as they help their owner Hannah, a psychotherapist, aid one of Hannah’s clients.

When the client, a gay man named John, is arrested, first for lewd and lascivious behavior after he unsuccessfully tries to flee a wild party, then for the murder of the man who escorted him to the party, other clients who know John through Hannah’s group therapy sessions take up John’s cause. In hopes of identifying a student who may be key to the case, they try to fit in at a college campus. Meanwhile, Spunky, the other four cats and a larger world of on-campus felines comprise the titular “army of noses” as they try to literally sniff out the perpetrator.

Descriptions of how the cats sort out layers of scent, using a mere scrap of clothing to tell them what their target odor is, are quite memorable, as is the climactic scene involving a large number of cats and other key players. Occasional chuckle-worthy moments add to the fun, as when Spunky comments, “Why do some humans work so hard to look so weird?”

On the down side, the fact that a professional psychotherapist would have absolutely no doubts about her client and enlist her other clients to help out strains credibility. Effusive descriptions of the animals’ loving behavior toward Hannah and others slows the pace. And readers should note that kinky behavior is at the crux of John’s plight. Although never graphically spelled out, it nevertheless takes this novel out of the purely cozy realm.

Overall, however, this is a competently written story that will hold appeal for animal-loving mystery fans.