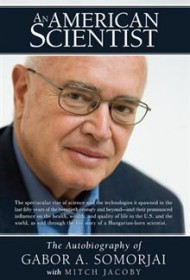 Clear, comprehensive, and confident, Gabor A. Somorjai’s “life history,” An American Scientist, aspires to reach a wide range of audiences, with mixed results. There’s something here for everyone—charming family stories, harrowing war chronicles, and groundbreaking scientific discoveries—but not everyone will engage with all of these components. It’s a rare reader who is equally interested in wedding photographs and the chemistry of catalysis, so it’s likely that different people will concentrate on different sections of this wide-ranging memoir.

Somorjai tells his tale chronologically, from his family’s days in Budapest in the 1800s all the way to recent moments on a Maui beach with his grandson. Hungarian born, Somorjai enjoyed a contented childhood until it was shattered by World War II, and some of his most vivid passages explore his Jewish family’s efforts to escape the Nazi terror that sent his father to Mauthausen. Somorjai’s indomitable spirit is obvious in his journey from a Vienna refugee camp to The University of California at Berkeley, where he worked with the greatest scientific minds of the 20th century.

Somorjai shares more personal stories from his younger years and more detailed scientific information in the later chapters. From the “space race” to the proliferation of semiconductors, Somorjai was part of it all, and he gives full accounts of those whirlwind years of scientific advancement. These, and the accompanying references and index, would be useful to college students, whether in history or science courses. The same students may be less interested in the extensive family tree Somorjai provides, as well as his lists of awards, accolades, and colleagues that span his five-decade career in science.

Therein lies the challenge for An American Scientist: finding an audience that will stick with Somorjai’s story from beginning to end. Although his grandchildren will certainly focus on different sections than will future science students, Somorjai does offer a consistent and worthy message for all audiences: Count your blessings, whatever they are, and you will go far.